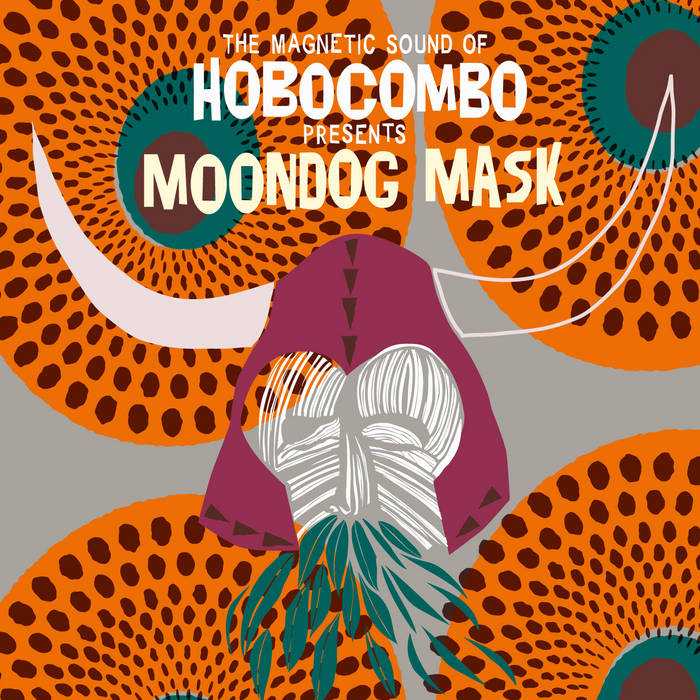 Moondog Mask is the second album from Hobocombo, a trio devoted to and inspired by the music of Moondog and formed by Andrea Belfi (Rosolina Mar, Mike Watt, David Grubbs) on drums and vocals, Rocco Marchi (Mariposa) on guitar, synth and vocals, and Francesca Baccolini on double bass and vocals.

The official release will be on November 4th 2013 on Trovarobato Records, distributed by Audioglobe/Digitalea.

Hobocombo’s first album, “Now that it’s the opposite, it’s twice upon a time”, surfaced in April 2010 and inspired by their first concert, was almost an “instant disc”, entirely composed of reinterpretations of Moondog’s repertoire. That first release contained some elements (the Cuban groove in Bird’s Lament, the medieval psychedelia in Witch of Endor) that anticipated further directions of their sound.

Proceeding with their concerts after the first album, the band started to develop a colourful orchestral sound (“The Magnetic Sound of Hobocombo”, to be precise), which, in turn, has created the desire to work on new original compositions and to insert deviations (“East Timor”, by Robert Wyatt) thus creating the definitive selection of tracks on this album.
The result is a reflection on the exotic, intended as “imagination” (possible worlds, possible mythologies) that paints distant fantasy locations, but always grounded to earth by field recordings (and synths) and by topics like the East Timor invasion.

The album is made of real locations like East Timor (or Berlin, or Bologna, or the Lessinia hills where it was recorded and mixed), but also imaginary locations, with the same spirit as Salgari who, while supported by perfect documentation, wrote about the Tigers of Mompracem without ever having left his native Adriatic coasts; or of Joe Meek who recorded “I Hear a New World: an outer space music fantasy” engineering 1959 technology (re?)producing the sounds of other planets.

The first Hobocombo album was a record that dwelt on Moondog’s composing methods, on Louis Thomas Hardin as a minimalist with refined counterpoint, who was frugal with his means and his musician line-ups. Instead, in “Moondog Mask” the band turns to The Viking of 6th Avenue’s imagination, to his being a “fantasy writer”, to the richness and varied timbre of his works, creating a possible bridge with exotica: a genre that reached its zenith in the ‘50s and ‘60s, when Moondog was also having his golden era.

An incentive to move in this direction was given to Hobocombo at the end of 2011 by the staff of Epsilonia, an experimental music show broadcast by Radio Libertaire in Paris. This collaboration brought Hobocombo to create “Witch of Endor”, a radio production in twelve parts describing twelve unusual and surreal soundscapes where Moondog’s urban field recordings mingle with recordings collected in those very same years by ethnomusicologists in the Italian countryside. These unpredictable combinations of Sardinian folklore, baroque counterpoint and Sixth Avenue background noise became raw material for their new album. Another of its roads leads towards exotica, using the same process as Les Baxter when he would add Amazon parrots to his big band.

This is why “The Magnetic Sound of Hobocombo” allows to touch African wax printed fabrics, to join Native American ceremonies, to dance for sun rituals and to be part of myths and rites both existing and (most often) imaginary. It includes Italian folklore instruments, Moondog sound inventions (such as the Trimba), African masks, surreal palm trees over iced lakes, cables and analogue synthesizer patches to mix and match.
Moondog rhymes with Robert Wyatt, Roberto Leydi and his collection of ethnomusicological recordings “Italia Vol.1″, Les Baxter, Joe Meek, Duke Ellington and his “Jungle Sound”, Congotronics, Loningisa, minimal music, exotica, Wendy Carlos.

Two guest musicians from the Berlin “Echtzeitmusik” scene, Nils Ostendorf and Simon James Phillips, also perform on the album. The mastering was done by Doug Henderson, who mixed Antony and the Johnsons’ “I Am a Bird Now” in 2005.